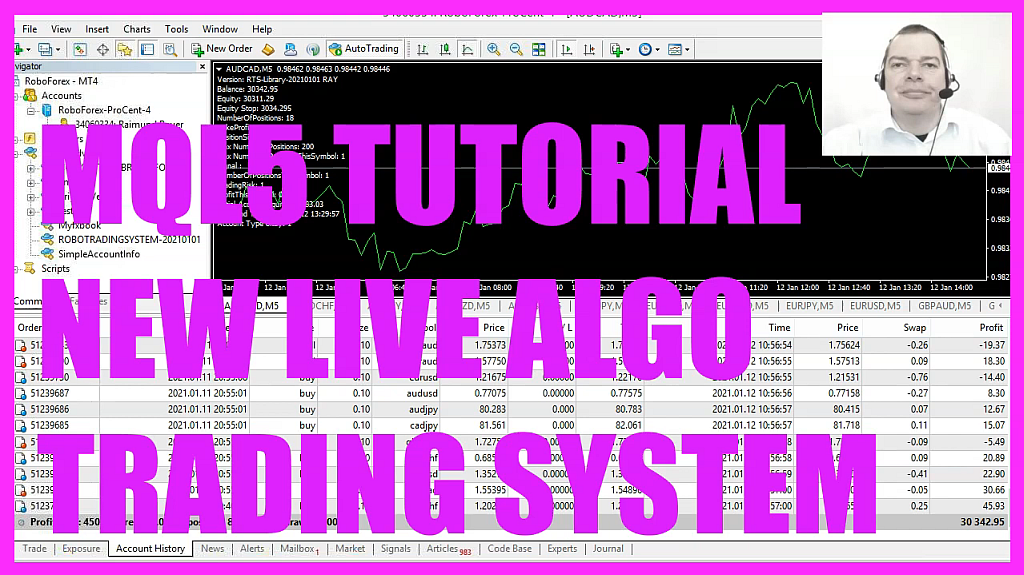 In this video, I would like to talk about a new system that I have released on January the 1st, 2021. It’s an automated algo trading system. I have also published it on the website, MyFxbook. I also need to mention that this is not an MQL5 system for Metatrader5, but it is an MQL4 system made for Metatrader4.

This is my statistics page on MyFxbook, and as you can see, the system started to grow very quickly. But after a few days, the balance curve started to get flat and therefore I asked myself if it would be a good idea to close all open trades, including the open losses, because I have seen this kind of behavior before. Therefore, I have coded a function to show a message box, when I click on the chart in the upper left corner and it says, Would you like to close all positions?

I will not do that right now. But I did it yesterday.

And after I did that, I have a net and a gross profit of one point five one percent for twelve days. So that translates to 15 percent and one hundred and twenty days and as a year has three hundred and sixty five days, we could expect forty five percent profit. But actually I don’t think that we will do that much. But you can see yourself. I have called this system crowd algo trading system because my company name is Crowd Company and if you take that term and google for it, you should be able to already see a lot of results for it.

For example, this is the YouTube channel. This is yesterday’s video. It’s automated content because I have to do one of those videos each day. Here is the link to the Web page. And if you click on that and click on one of the current posts, you will see the same video content. And below that, we have the download for the Metatrader setup file. This is the download for the demo system that will work on Metaquotes, original demo accounts.

And here is the download for the statistics. When I click that and open the page, I see a timestamp for January the 12th. That’s actually the current day. So far we have made four hundred and fifty dollars profit and I expect this system to be a good choice because actually it is a clone from this system. I have traded this one in 2020 with good results. You’ll see this drawdown here in March. That was the time of the first Lockton here in Germany.

And I have tried other systems that have not performed that well. As I’m happy with the results of this one, I took it as the foundation for the new one. This MyFxbook Expert Advisor will upload the current statement every five minutes. Currently we have January the 12th and when you see this video sometime later, you should still be able to get the current statistics when you click on this link, it works without any credentials. Here is the official system page, currently we have made 59 trades, but this will increase in the future.

And if you’re interested to learn what is working and why it is working, you can analyze each and every of these positions here. So for now, that’s it. If you have any questions or suggestions about the system set up, just send me an email. For now, I will let this system do its job. And I would like to say thank you for listening.