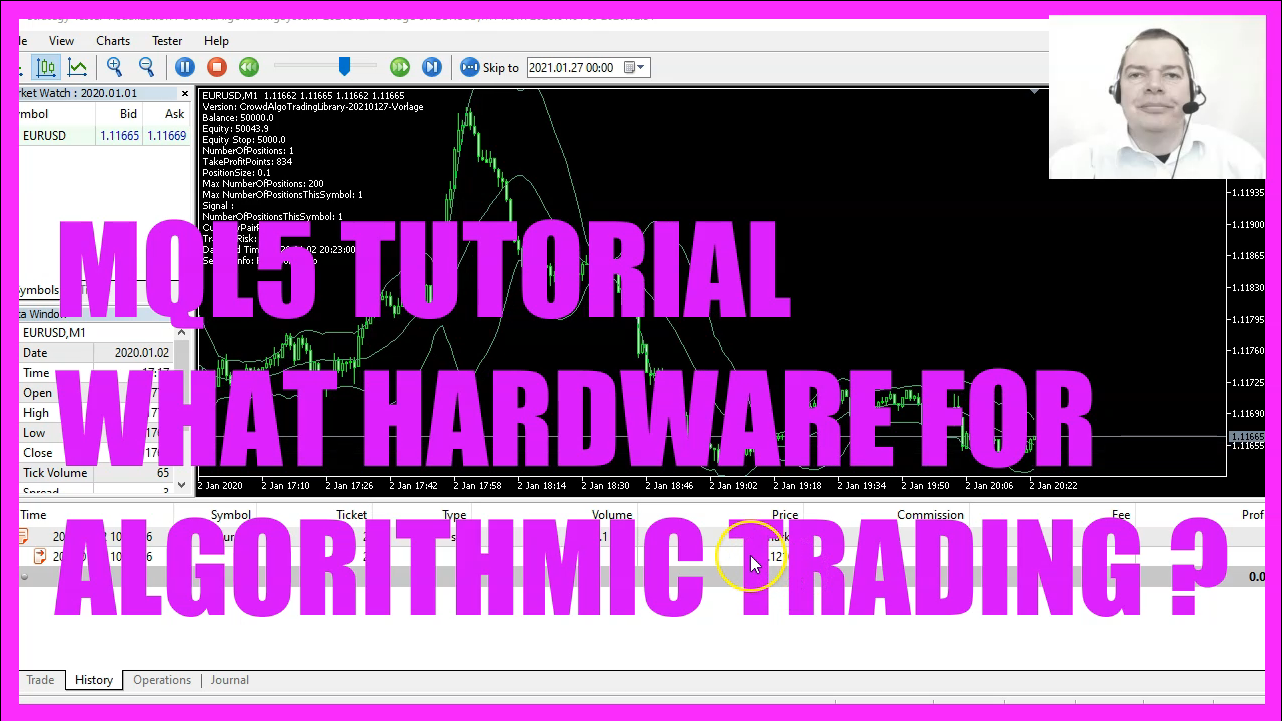 In this video, I would like to talk about a question that I get from time to time, and that is the question what kind of hardware can I use to work with Metatrader4 or Metatrader5? So let’s go through all the different solutions that I use. This system here currently is running on a so-called virtual machine, I’m actually using the same virtual machine right now to record this video. This is the new version for the crowd algo trading system that I’ve created on January the 27th.

And I would like to do a live trading experiment in February.

This is VNC Connection Viewer. I can use it to connect to different PCs. I have a lot of those devices. This one is a Windows eight device. It’s running with two gigabytes of Ram. The Metatrader is running smoothly. I can move the machine around and it’s also possible to remote control everything. This, by the way, is the MQL4 version of the crowd algo trading system, and today we have two thousand two hundred seventy three dollars of gross profit.

If you are interested, you can watch the videos that I have made for this MQL4 version. By the way, the Windows four version is running on such a stick device. They call it computer sticks. Those sticks are a little bit bigger than an average USB stick. They don’t need much room and you can use them on screens or TVs because they come with an HDMI port. A device like this one is around 100 dollars. But for the new system, I decided to buy one of these mini pcs here.

This is a little bit bigger than cigarette box. You see the pen here, the whole thing, including the keyboard would fit into a pocket. And this hardware is a little bit better and it’s newer. We have, I think, four gigabyte of RAM and it’s very affordable. You might be able to find it for around 100 dollars online. The really cool version would be to use devices like these mini notebooks. Maybe you remember that kind of device from about 20 years ago when we all used pocket PCs.

These pocket notebooks have been very popular. But back then they only had Windows Mobile or the Symbian operating system. But these two machines here run with Windows 10 and eight gigabyte of RAM. That is more than enough to run Metatrader. And you can do a lot of other cool stuff. For example, mobile programming. If you don’t want to spend that kind of money, you could run Metatrader on an old netbook. This device is about 10 years old.

It’s running with MX Linux. And when you use software like play on Linux and wine, it’s also able to run Metatrader. Used devices like this one would maybe cost between 50 and 100 dollars. And when I started out to use automated systems, I had over half a dozen of these devices on my desk. But today I really prefer to run Linux on a desktop PC, Virtualbox in the background running Microsoft Windows. And when you are not at home, you could use this mobile version of Metatrader to at least see what’s going on with your account.

I think it’s available for Apple devices, too. This one is from the Android store. You can see all the numbers, but it’s not possible to do automated trading on mobile devices right now. And basically, that’s it. So now you know what kind of hardware you need to run Metatrader. That’s all for today. And thank you for listening.