MQL5 TUTORIAL GRUNDLAGEN – 130 HOW TO IMPROVE YOUR RESULTS WITH MASSTESTS 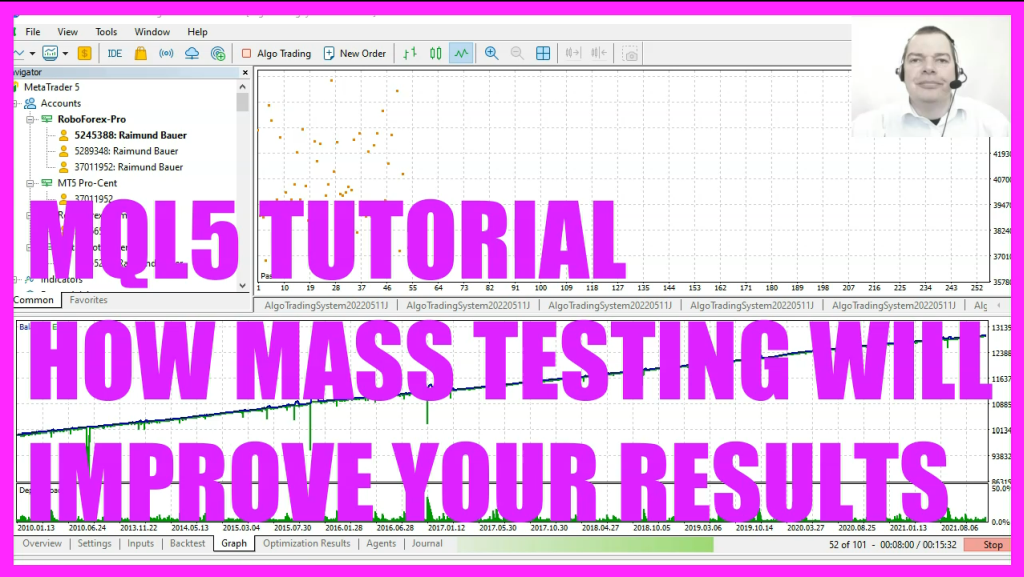 In this video we are going to talk about mass tests and why most people don’t get the reason why automated trading works even when you blow up an account. So let’s find out how to do that. This is a system that I’m testing right now. I hope it won’t blow up my computer while I’m recording because it uses lots of performance as it is doing 101 tests here. And that is for eleven years.

Here is the current setting. I’m testing the Australian dollar against the yen and I’m doing it for 2010 until 2021. So that’s exactly eleven years. And the little dots here on the screen are results because I’m using a fast generic based algorithm to do all these tests here. That will take some more minutes.

But you already can see that we have good results, a good expected pay off. But when you look at the drawdown, you will see that it can be as high as 70%. So at some point in time in these eleven years, your system will go down and down and you will be convinced that it’s going to crash. For some people, even a drawdown of 22% might be too much, while others are able to stand about 70%. And if you scroll down here, you will see that we have lots of different results, a different number of trades, different values for the expected payoff.

And that is because I’m trading a random entry here. Now you might ask why should anybody trade a random entry? And here is the answer. Let’s think of a coin toss. If you flip a coin, there is a random chance that you will get heads or tails and that’s about 50 / 50.

It might be possible that you lose the coin or that you throw it behind the cupboard. But most of the time you will get either heads or tails. The more often you do that, the clearer is the result. And that’s exactly why I’m doing eleven years for ten or 20 currency pairs and why I use a random entry to find out if it really works. Well, this currency pair looks very good.

And this result also is okay. Some people might already give up when they see something like this. Here we have losses. The red dots mean that we have less money than we had before we started to trade for eleven years. And this result is even worse. But let’s have a look at the results here.

Even without counting, you might see more green dots than red dots here. It’s even more obvious, I would think that we have 10 to 12% losses here and about 85% to 88% small or bigger profits. Now, most people want to avoid these losses here and once they see a loss, they stop testing. Or they see a big draw down and they stop testing. But let’s sort the results from the last test. I have done a few dozen today.

This is the current one. And all the 101 automated tests for eleven years have been profitable. And I wouldn’t have been able to get this result if I didn’t do all the other tests here. So if you see something like this where you make more losses than profits, a simple change of a single parameter could change the whole thing. And the next result could look like this one. But here is where most people get out and say “I have just proven that it doesn’t work”! So really do mass tests for long periods and for lots of currency pairs. You can right click and export the files for Excel. So let’s save this file. And now I will pick the next currency pair and start over again. Here you can see that we have four cores who will do 25 tests each. That will take maybe about 20 minutes.

Here is the current status and now you see the first results here. We would have made three times a good profit. And one time we would have lost almost the whole account. But please stick to the idea with the coin toss here. If you would flip a coin four times and you would get two and a half of what you have put in for three times, would it be a good idea to do that? This is a little later.

Once again we have made good profits and two times we have made a big loss. Is it worth to trade a system like this one? Well that is exactly what you need to answer. And to do that you need these numbers. We have now done 18 out of 101 tests and you already can see that you have more positive results than negative results. But if you can pick a currency pair would you trade this one? Or would you prefer to trade this one? To find out you really need to do the tests and do the calculation that is involved.

Yes it takes time, but in this video you have learned how to decide based on mass testing (!) by using a random entry (!) if the other components of your system work and if your profit expectancy for eleven years is good or bad. Thank you for watching and I will see you in the next video!