MQL5 TUTORIAL ENGLISH – HOW TO PROFIT FROM A TREND CHANGE 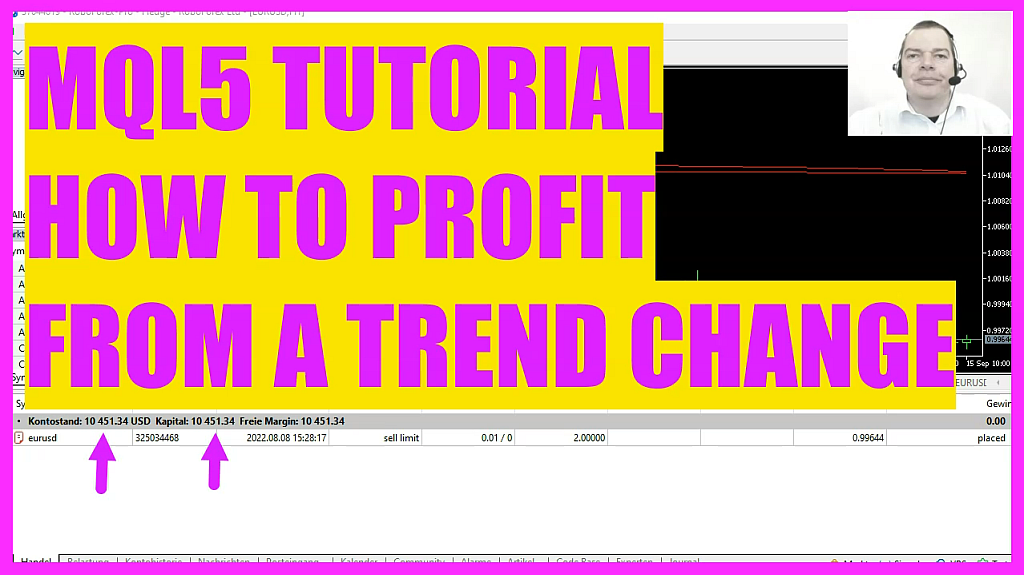 This video is about the topic of trend reversal. And as you can see quite well, the direction for the Euro US Dollar has surprisingly turned. In plain language, this means that we have two moving averages here. One for 1000 candles and the other for 1100 candles. And in the last few days, the price has been consistently above these two moving averages. So it was going back towards the uptrend. Until then, on September 13, a candle emerged that looks pretty huge and it’s down from a €1.01 to pretty much one euro. My system actually closed all positions here in profit as well. Strictly speaking, it’s not that every position was profitable. But that has never been the case in the past, because the system is designed to close positions when the account is in profit. The original deposit here is 10,000. Currently we have a profit of 451. I think US dollars. And right now my system is not trading at all because the price is on the wrong side of the trend.

What does it mean in plain language? If you zoom in on the chart here with the minus button, you can see very nicely that we’ve been trading a downtrend here the whole time. And for the most part, the price was below the two moving averages. That then changed briefly here at this point. And after this monster candle here pushed the price back to the other side, nothing is happening right now. And the reason for that is: we’re waiting for there to be the next crossover here. Only then will trading continue, because that would mean that the long-term downtrend continues. And if that happens, the system would continue to sell. But if the price turns and lands above the two moving averages without a crossover, then that would be a buy signal for us. And as long as this does not happen, our system does not trade at all. Of course, we could change this now by simply changing the two moving averages, for example. But that is not the point. The entry signal is not the reason why a system is profitable, but it still requires a defined rule for entry, which should also not be violated.

After all, every game has its rules and we’re not going to show up to a soccer game with field hockey gear and a tennis racket. My rule for this system is: if my entry signal and the long term trend match and the price is on the right side of the moving averages, then trade here accordingly. And that has worked well in the past since about mid-July. And that’s why I’m sticking with my entry criteria, even though it might be a little bit boring right now. But as it looks here, we should expect to see another crossover here in the next few hours. Okay, that was a practical part. Actually, it belongs in the course for the Platinum Group. But since we have this special situation here, I wanted to show it briefly. Because if a rule has proven itself, then it makes sense to stick to it. And I’ve been testing this for various years. And in this short video, you learned how to confirm your entry signal with two simple moving averages, to only trade when your signal and the long-term trend also confirm each other.